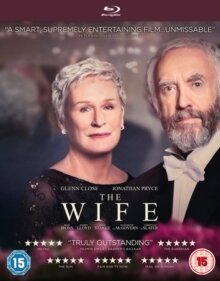 For nearly half a century, Joan Castleman (Glenn Close) subsumed both personal literary aspirations and pride to give willing support to her overbearing and philandering novelist husband Joe (Jonathan Pryce). However, when he received the career capstone of the Nobel Prize for Literature, their journey to Stockholm might set the stage for her to publicly pop his pretensions. Telling take on the Meg Wolitzer novel co-stars Max Irons, Christian Slater, Elizabeth McGovern, Annie Starke, Harry Lloyd. 100 min. Widescreen; Soundtrack: English.