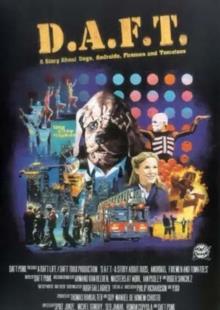 d.a.f.t.: a story about dogs, androids, firemen, and tomatoes features the parisian electronica duo's videos, along with commentaries, storyboards, and behind-the-scenes footage for each of the clips, remixes, and a live show, "rollin' & scratchin' live in l.a." spike jonze's popular video for "da funk," michel gondry's "around the world," roman coppola's "revolution 909," seb janiak's "burnin'," and the band's self-directed clip for "fresh" reaffirm the band's musical and visual inventiveness, while the live show features a whopping eight multiple-angle views. the masters at work, ian pooley, roger sanchez, and armand van helden remixes add another layer of depth to this feature-packed dvd, which sets the standard for electronic artists as well as musicians in general to present their work in a creative, interactive way.