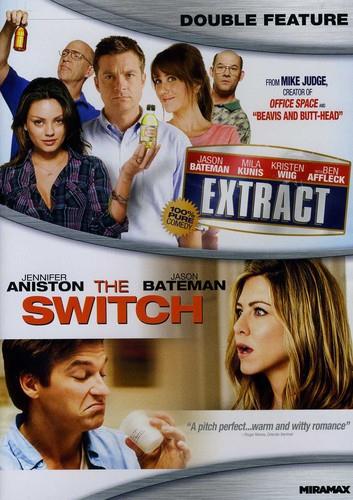 - The Switch
Jennifer Aniston stars alongside Jason Bateman in this offbeat comedy as Kassie, a smart, fun-loving single woman who, despite her neurotic best friend Wally`s (Bateman) objections, decides it`s time to have a baby - even if it means doing it herself - with a little help from a charming sperm donor (Patrick Wilson). But, unbeknownst to her, Kassie`s plans go awry because of a last-minute switch that isn`t discovered until seven years later... when Wally gets acquainted with Kassie`s cute - though slightly neurotic - son.

- Extract
About to sell his successful flavor extract company, life is almost sweet for Joel (Jason Bateman, Horrible Bosses) until a freak on-the-job accident happens. Add to that his bored wife (Kristen Wiig, Bridesmaids), his laid-back best friend (Ben Affleck, The Town ), a sexy con artist (Mila Kunis, Friends with Benefits) who blows into town with dollar signs in her bedroom eyes, and a dumb gigolo - and life as he knows it turns sour. Filled with laugh-out-loud one-liners and raunchy comedy, Extract is 100% pure hilarity.